4 excellent ways on how to correctly choose who to marry is another powerful  message by Pastor Kingsely Okonkwo, the lead founder of David Christian Centre (DCC) and an amazing marriage and relationship coach .

He has written several books on relationships and marriage therefore, he literally has a lot to teach young and married people on how they can select who to marry. He shared this awesome teaching from one of his numerous books titled “who to marry”. This book is specifically made for maintaining good human relationship and marriage, but most especially for single people.

Pastor said this was one of his books and he wrote it about 20 years ago.

According to him, the book has about ten ways on how to choose the right spouse but he focused on 4 ways to know who to marry while asking the audience to get the book and read up the rest if need be.

Pastor finds it quite surprising that people do not know the basic things to look out in whomever they think they want to marry. In his words “You know I really wanted to do something very deep, something very complicated but time without number I have found out that people do not know the basics for choosing a good partner so I”m going to do the basics today”.

He categorically stated that he doesn’t teach from the book most of the times he has teaching engagements or has to preach. Reason being that he presumed that the details contained in that book are the basics anyone should know before searching for a spouse. However, more often people have proven his notion wrong. They do not know the basics. Hence, his desire to help them in that regard.

The importance of a good foundation can not be over emphasized. ‘Common guys you all  need to be reminded that marriages don’t fail In marriage. 50 percent of marriages fail even before the marriage even  started and that is because of a wrong foundation.  If the foundation is destroyed, what shall the righteous do” he stated. know more about who to marry

He went further to say ‘You know,  I would always share with you  the stories of how I did all manner of things way back in secondary school days. And of course I came last all the time You know, and there’s nothing anyone could do about that because my foundation was wrong.

What’s the point I’m trying to make. I’m trying to say.The basics are rare. Scripture is clear about this, that if the foundation is destroyed, there’s nothing the righteous can do”.

Pastor took some time to talk about his wife  and how they met. How exciting and fun marriage has been with her and how he wouldn’t ask for any better person to do marriage with rather than his wife_pastor Mildred Okonkwo.

Immediately after that, he delved into the message properly as he carefully enumerated the four guidelines that will help know who you should marry. He called these guidelines the four C’s

One of the secret to a successful marriage lies in choosing someone of the same faith as you. Pastor carefully explained this by making some examples. He said that you can not marry someone who wears earrings, bangles and necklaces when your church of worship or belief is against that. If you go ahead with such marriage, there’s a big tendency that the marriage will hit the rock sooner or later for obvious reasons you know.

Marrying someone who is not of the same faith as you is not an option. How many people do you know, marry just somebody in any religion, he asked. it’s not an option for them. No, no, no, no, no, the Bible is clear about these things, he said. 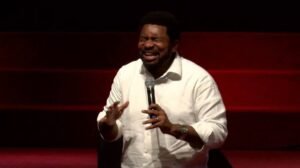 Often times, people have wondered why marrying from the same household of faith is important. Pastor Kingsley explained the reason for this rule. In his words you need to marry a christian just like yourself because you can’t marry someone that is not your kind. Marrying a christian means that they have the spirit of God operating in them.

“You need to realize that what makes a marriage work is not just the love you have for each other. Your security and marriage is not in that your spouse loves you. No, no, no! It isn’t in the love of your partner. There are many things they would  not do to you if they fear and respect God”.

He concluded the message by praying for his audience asking God to direct them to their right partners, open their eyes to see red flags and ability to make the right decision.know more about who to marry

I am too useful to be wasted by Rev. Funke Felix Adejumo