Farewell Minister Sammie Okposo: we will miss you. It is quite unfortunate to lose such a popular musician at this time. However, we cannot question God and as such have accepted our fate.

Recall the famous music minister who one time came to his social media page to tell the public about his infidelity and also beg his wife for forgiveness? He is dead. Sam Sammie Okposo died on the 25th of November, 2022 at the age of 51.

After his confession, he deactivated his social media accounts but had them reactivated prior to his death. Samie hails from Delta state, South South Nigeria.

There are so many controversies surrounding his death. Some said he must have died of depression while others say he died of exhaustion. Well, his colleague Righteousman posits that he died of exhaustion since he died in his sleep immediately after his arrival from the United Kingdom after a praise concert.

An intense out pour of emotions and grievances on 16th December, 2022, ensues as the popular gospel musician Sammie Okposo funeral takes place. 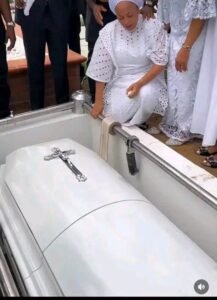 So many popular gospel artistes such as Frank Edwards, Ada Ehi, Tope Alabi including movie lords like Segun Arinze and a host of others graces the occasion as he is finally laid to rest in the bosom of the lord in a private cemetery situated at Ikoyi Lagos state.

All of us at Rhemachannel is saying farewell sir: we will surely miss you. you have left an indelible mark in Christendom which time cannot erase.

Wisdom for your Next Level by Funke-Felix Adejumo